The 15th Strategic Energy Technology Plan (SET Plan) conference took place in Bled (Slovenia) on the 25th and 26th of November 2021. The theme of the conference was “Research and Innovation to deliver a just and sustainable energy transition”. The conference was organized by the Slovenian presidency of the Council of the European Union and with the European Commission, and was the opportunity to discuss R&D in the energy sector, its support to industry leadership and contribution to solve societal problems. Participants and panelists discussed important energy-related topics and how the different R&I SET Plan strategic components and priorities contribute to reaching the 2030 and 2050 EU Green Deal targets.

The high attendance and the active participation of conference attendees, both online and on site were very positive. The event attracted over 500 participants (2/3 online and 1/3 on site) from 43 different countries, which turned it into a major international research and innovation conference beyond the EU level. Among the participants, over 300 represented companies.

In contrast to previous SET Plan conferences, the Slovenian presidency invited the representative of the nuclear sector as a panelist. Józef Sobolewski, Chairman of NC2I, spoke during the panel

New climate targets require us to step up with the development and deployment of clean energy. Will hydrogen and other enablers (including synthetic fuels) develop fast enough to allow decarbonisation of energy production and utilisation in industry? What could be the best energy mix for the economy, and will it include new nuclear technologies (small modular reactors)? How will clean energy transition influence the competitiveness of the European industry at both production cost and for producing equipment for energy?

The panel discussion was recorded and is available on video (https://setplan2021.eu/online- streaming/), DAY-1, Panel 3.

The most important statements made by Józef Sobolewski were the following:

Hydrogen is often presented as a silver bullet solution for decarbonisation. But hydrogen is only an energy carrier, not an energy source. Hydrogen needs to be produced first, and this is energy- intensive. Current use of hydrogen in EU is approx. 10 Mt/y mainly for the petrochemical and fertilizer industry. It is essentially produced by steam reforming of natural gas, which emits large amounts of CO2 in the process. If we moved to low-temperature clean electrolysis instead and if we used all renewable electricity in the EU for this purpose, this could ideally generate between 1.7 and 2.2 Mt/y of hydrogen, depending on whether or not one includes compression losses. Current RES electricity in EU-27 could at best produce about 18-20% of current  hydrogen use, however, this electricity would then be unavailable for other purposes.

Remember: today green electricity can produce only 20% of the currently needed hydrogen. What about other future needs of hydrogen? The intended decarbonisation of steel making, chemistry, jet fuel etc. could quite easily triple or quadruple the need for hydrogen.

If we want to go for deep decarbonisation, then the primary energy demand would be so high that I can see no net-zero without nuclear. I do not think that Europe has the luxury to renounce to one of the biggest low-carbon energy sources that is available to us.

We have two areas where SMR can deliver an important impact. First, it is the impact on electricity production through the reduction of CAPEX IN LW-SMRs. Big power reactors have one unpleasant feature, which is the high CAPEX requirement that negatively influences LCOE. The financing costs can reach on average 70% of final cost of electricity. This is good business for finance institutions, but certainly not for consumers.

The second important impact is the possibility to decarbonize industry and transport. In his first statement, Józef Sobolewski spoke about the total final energy consumption by end user. He mentioned that 60% final consumption is used for heating and transportation, now fully covered by fossil fuels. Using existing technology of high temperature nuclear reactors one can satisfy already a very large heat demand easily up to 600°C, in the future even closer to 1000°C. This is fundamental to avoid further de-industrialisation of the EU and carbon leakage. The HTGR technology is rather mature, and we could open a special program in the EU to speed up deployment of this technology, at least in those countries that are favorable to nuclear energy.

The first SMRs of both types mentioned (water- and gas-cooled) could be built in the EU before 2030. If we want, of course. If not, we stay outside this business, which is now very intensively being developed in Asia, North America, and the UK. 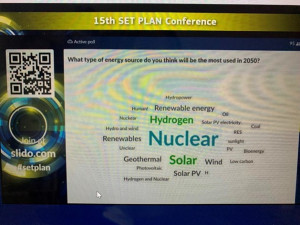 Finally, a short comment on the picture above. This interactive event allowed polling attendees about their opinion. The most common answers were visualized in the form of a word cloud with the most quoted energy source represented by the largest letters in the center. Below is the answer to the first question of Panel 1, which came to a big surprise for most.